On November 6, Pat, Dixie and I enjoyed reading excerpts from Voices from the Snake River Plain to a standing-room-only crowd in Twin Falls, Idaho. A heartfelt thanks goes out to everyone who helped celebrate the launch of our new book. If you missed the event, copies are still available at the Magic Valley Arts Council, 132 Main Avenue South, Twin Falls, Idaho. They are also available at the Log Cabin Literary Center, 801 S. Capitol Boulevard in Boise, Idaho.

Three writers with stories to tell

Judi Baxter, who owned and operated Judi’s Bookstore in Twin Falls from 1978 to 1992 wrote this review for BookChat. Check it out. Thanks, Judi, for the positive review. Thanks also to the Times-News for letting us reprint the article here.

Three ‘writers with stories to tell’

It is always thrilling to hold a treasured book in my hands – rediscovering a childhood favorite, inhaling the scent of an old, leather-bound tome, perusing glorious pictures from a beloved illustrator or gently opening a much-anticipated title for the first time.
The thrill was certainly there when I received a copy of “Voices From The Snake River Plain,” the collection of essays, short stories and poetry from three talented local writers, Bonnie Dodge, Dixie Thomas Reale and Patricia Santos Marcantonio.
The lawn mowing, leaf raking and sidewalk sweeping went by the wayside as I sat on my deck and immersed myself in their worlds. I laughed, sighed, held my breath for a few moments and even cried while reading of families and friends, journeys and jealousies.
Marcantonio’s “The Hitch,” an engaging short story about a camping trip gone bad, left me giggling and nodding my head in agreement: Been there, done that! Forget the spectacular Stanley Basin scenery, mountain air and sparkling Salmon River; a lost trailer hitch leads to pointed fingers, heated words and thoughts of divorce. But her wise old character, Earl, quickly snaps everything back into focus: “Earl pulled up his welding mask. ‘You folks should have a good time once this is fixed. You can hike the trails, cook over a campfire, fish a bit. See the stars together. That’s the only way to see the stars, with someone you love so you know you aren’t dreaming.'” Beautiful!
In the chapter “Remembrances,” Reale captured my heart with “Mush.” Anyone who grew up having to eat oatmeal-the-texture-of-wallpaper-paste for breakfast every morning will immediately identify with the feisty, stubborn little girl. Her mother said she would eat it. Period. She was determined not to. Period. It became a royal battle of wills and more than a little ingenuity on young Dixie’s part: feeding it to the dog, tossing it out the window, dribbling large spoonfuls around her bowl. Since she didn’t have to eat the slopped part, that maneuver became her answer:
“I decorated the room. The entire bowl was drizzled and splattered one spoonful at a time across the mahogany tabletop, the wall, the bench and onto the floor. There was so much of it that gray puddles ran into one another making small lakes. Once Mama saw the mess she scraped it back into the dish and slung it in front of me. Now it was cold and slimy, had a faint flavor of English wood oil, and smelled a bit like floor polish. ‘You will eat this,’ she said.”
At this point, I was chuckling, but it was nothing compared with the laugher that erupted when I came to her final solution. What a creative little girl!
After reading Dodge’s “Surviving the Storm,” set a few days after the attack on the World Trade Center, I barely moved for many long minutes, reflecting on her words, recalling the overwhelming feelings of those haunting days as our nation sat in stultified silence and pain.
The women debate their plans to attend a bookfest in Boise and a trip to Idaho City for their annual mini-retreat, struggling with their own fears and doubts about leaving home and families so soon. “It’s what they want,” writes Dodge. “They want to terrorize us into inaction. I think we should go.” And so they do.
They spend hours exploring the former mining town, picking wildflowers, spontaneously attending a Catholic Mass, sharing homemade peach cobbler at Trudy’s Diner.
Dodge writes: “Heading for the car, we stop when we see an area of the cemetery marked with weathered boards, each etched with only one word: Unknown. Like rubber bands, we’re snapped back into reality as we think of the many new graves in New York City, some of which will soon be marked: Unknown. We exchange glances and, unembarrassed by our tears, embrace, holding onto each other longer than usual.
“We pass tissues like candy. Our hearts hurt. We have no words, no stories to define our nation’s massive devastation. As we travel the road that will take us back to our families, smiles chase away sadness and the desperate need to be home … Even in this troubled time, when our nation is stunned and nothing much is moving, we are. Because we’re still writers with stories to tell.”
And our lives are richer because these three writers have gathered and shared those stories with us.

Wearing my writer’s hat at the State IWL Conference

The IWL State conference was filled with energy and information. Here I am presenting my workshop, The Organized Writer, and wearing my writer’s hat. 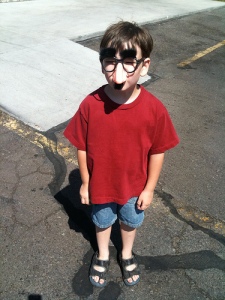 Kennedy after trip to the dollar store.

Just because I haven’t posted a blog since May, it may look like I’m doing nothing. But the truth is that I’ve been busy with summer, gardens, grandsons, and laying out a book for The Other Bunch.

The garden is producing generously every day with more broccoli and cabbage than I can eat. The grandsons spent the month of July with us swimming, riding ATVs, and looking for ghosts. It was an honor to watch Kennedy at age 5 jump off the diving board during swim lessons. Dante, who turns 8 next week, adopted our orphaned cat Lucy Smith and hunted up grasshoppers and caterpillars for his bug box, while big brother Dmitri helped make banana bars, birthday cake ice cream, and Twinkie cupcakes. All boys are now back in Hillsboro with their parents who are glad to have them home and underfoot again. And yes, I miss them, but now that the house is empty, I’ve been busy laying out our new book, “Voices from the Snake River Plain”. This is a collection of essays, short stories, and poems written by Dixie Thomas Reale, Patricia Santos Marcantonio, and me. With any luck and a lot of patience, the book will be available soon.  Just so you know, when it looks like I’m doing nothing, I’m busy living life and enjoying every minute of it.

It’s rare that I like a movie better than a book. Often, if I really love a book, I never bother to see the movie because I don’t want to be disappointed. In the case of The Reader, I didn’t really love the book, and probably wouldn’t have read it if it hadn’t been for my book club. But I did read the book, and then watched the movie.
Personally, I believe the movie would have been hard to follow without first having read the book. But unlike the book, which left me lukewarm, Kate Winslet’s portrayal of Hanna Schmitz has stayed with me. I find her popping into my thoughts at the oddest times, and I have to stop and catch my breath. As an artist, Winslet brought Hanna to life in a way the book didn’t, and it’s clear to see why the Academy of Motion Picture Arts and Sciences awarded her an Oscar for her work in this movie.

There is something to say about good books and good actors. They make us think, and they make us feel. They help us see with different eyes and amplify our life experiences.

Staying Positive in an Uncertain Economy

Things are pretty grim in America. The economy sucks; jobs are hard to keep, and harder yet to find. With markets for writers shriveling up like last year’s apples, it’s hard to stay positive. But maybe Elizabeth Gilbert’s video, author of Eat, Pray, Love, will inspire you to keep writing in these uncertain times. Enjoy.

This entry was posted in Inspiration, Writing, year 2009 archives.

I remember my first editor interview. I had ten minutes to wow a Supergod with my prose. I had ten minutes to convince someone I had never met that my book was better than all the rest, worthy of her time and attention. I was nervous and I had more questions than I had answers, and I remember the editor saying that if I had to ask her if my writing was any good, then maybe I wasn’t ready.

It reminds me of the auditions I watch on American Idol, the amateur singers who believe they are ready to be the next icon. Last week Paula Abdul said to a crying contestant, “I’m sorry honey, you’re just not ready.” The contestant didn’t understand. “Let me sing another song,” he begged.

I know how that feels, but I also know how frustrating it can be for the judges. Because the truth is, wanting it isn’t enough. You have to be ready. If you are a bundle of nerves, if you can’t talk straight enough to sing, if your voice quivers, if you cry when you are rejected, how can you expect anyone to take you seriously?

Whenever you put your work/art out there for other people to enjoy, you have to be ready for the criticism and rejection that will follow. Not everyone likes the same songs; not everyone reads the same books. This is something I’ve learned during my writing career, and I no longer quake in my shoes when I have an interview with an agent or an editor. Now I walk in with confidence, ready to discuss my work and the writing industry. Because I know that writing, like singing, is so competitive the chances are two to one my work will be rejected. That is the nature of this business, especially now in this economic recession.

Instead of crying and begging for another chance, I thank them for their time and for reading my manuscript. Then I go back to work perfecting my voice and defining my niche. Because one of these days, I’ll meet an editor who wants to buy my books and unlike that desperate American Idol contestant, I will be ready.

This entry was posted in Writing, year 2009 archives.