I’m happy to announce that Waiting will be part of an ebook boxed set with two other great books, Goddess of Suburbia, by Stephanie Kepke and The Paris Effect, by K.S.R Burns. Thank you to our wonderful publisher Booktrope for this opportunity, and to Michelle Fairbanks for the fantastic cover.

Here’s the scoop on this exciting new project:

Suburbia meets scandal in Stephanie Kepke’s Goddess of Suburbia, a hopeful and honest portrayal of that moment in every woman’s life when it’s time to make a change, even if that means risking losing it all. When pillar of the community and PTA mom, Max, finds herself embroiled in an Internet scandal, she must learn to stop living her life on auto-pilot or forever remain a suburban lemming running toward the cliff of old age. This story is a must-read for women looking to reconnect with their passions and live authentically.

In Bonnie Dodge’s Waiting, three generations of Foster women, senior citizen Maxine, attention-seeker Grace, and aspiring artist Abbie, think they are nothing alike. But they all share a secret. They wait. For love, for attention, for life, for death. In their journeys between despair and happiness, they learn there are worse things than being alone. Like waiting for the wrong person’s love. With sensitivity and humor, Waiting carries readers into the hearts of three women who learn that happiness comes from within.

In K. S. R. Burns’s highly praised debut novel, The Paris Effect, a food-obsessed young woman sneaks away to Paris without telling anyone. Not even her husband. Once there, she’s robbed, stalked, arrested, and kidnapped (almost). Worse, she finds that her numerous issues have come right along with her. Grab a croissant and settle in for a decidedly non-touristy trip to the City of Light.

An amazing deal for three terrific stories in one ebook. For updates on our release date, launch parties, and more, like the Perfectly Imperfect Facebook page. Be sure to check the page often.

Win a copy of WAITING on Goodreads 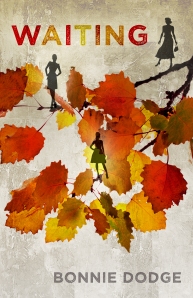 There is nothing as glorious as Fall in southern Idaho. The days are warm, the skies clear. The colors on the trees start to change as leaves flutter to the ground.

On such a dazzling day my writing partner and I arrived at Rock Creek Park to shoot video for a book trailer. Mid-afternoon, it was warm and we were having trouble with one of our props.

“Move it to the left,” my writing partner said.

A young boy, perhaps six or seven approached. “What are you doing?”

“For what?” He watched as she aimed the camera and pushed the lever.

He gave her a funny look and continued to watch until he realized no superheroes where going to jump out of the tree.

Bored, the young boy drifted away.

“I’m too short,” I said as I tried to straighten the prop, now lodged in the tree. “I wish I had something to stand on.” As I looked around for a log or a rock, a teenager scaled the tree and unlodged our prop.

“Thank you,” I said, extremely grateful.

Curious but silent, he watched. Then as quick as he appeared, he was gone.

Fussing with the prop, my writing partner said, “I wish I had a piece of wire.”

Just like that, the teenager reappeared, this time with a rusty piece of wire.

“That’s great,” she said as she adjusted the prop.

He stood back and watched as she filmed the video.

“Check this out.” She hit the playback button.

Silently we bent our heads over the screen.

She shot it again. Again we peered at the footage.

“That’s a wrap,” she said satisfied.

“Thanks for your help,” she said as the teenager walked towards his little brother. “You make a great director’s assistant.”

He didn’t say goodbye. He didn’t vandalize our car, or glare at us with drug-hazed eyes. He didn’t ask for money. I didn’t see his face, but I know he was smiling.

For one brief moment on a Sunday afternoon, three strangers converged. Silently we touched something in each other. Heart-stopping, it was beautiful. 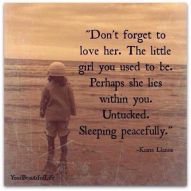 There’s a picture of a little girl looking out to sea by Kiana Llanos floating around Facebook. The picture caption reads: Don’t forget to love her. The little girl you used to be. Perhaps she lies within you. Untucked. Sleeping peacefully.

The picture brings back memories of my writing partner Dixie Thomas Reale who passed away a year ago from cancer. Dixie was a fighter, and at first blush she had a chip on her shoulder bigger than Mount Rushmore. Feisty, she refused to let anyone boss her around. I can barely remember the last time she laughed, but I remember the last time I saw her cry.

The first time I saw tears in Dixie’s eyes was when she described how she rescued a kitten in her rock shop in King Hill. The kitten had been abandoned by its mother and would have died if Dixie hadn’t stuffed that kitten into her shirt to keep it warm. Fostering the kitten, which she named Ice Cube because it was so cold, Dixie wrote a story about her “Christmas” kitten and planned to include it in a future issue of our Snake River Plain books. The second time I saw Dixie cry was one day at lunch when we were critiquing her memoir. Dixie had a keen sense of humor and had been working on a novel about a corrupt minister. She stated that she couldn’t finish the novel until she wrote her memoir, so she put the novel away and started pounding out the pages. That day at lunch we read about a little girl who was shoved in a corner while her family struggled to raise Dixie’s mentally-challenged brother. Since he was younger than Dixie a lot of responsibly fell on Dixie’s shoulders. In those pages she described the details of some of the escapades, but she rarely described the emotion. She’d been taught to swallow her feelings. When I said, “My heart breaks for that little girl,” tears spilled down Dixie’s 68-year old cheeks. She was still a child inside seeking validation. The last time I saw Dixie cry was when I visited her in a nursing home and bragged to a fellow writer about Dixie’s memoir. Dixie cried knowing she’d never get to finish it.

It’s because of women like Dixie that I wrote Waiting, a novel about three generations of Foster women for wait for love, for attention, for life, for death. Women like Dixie helped me form my character Maxine, who waits all her life to be happy. Who, like so many of us, ignore the fact that we alone are masters of our own happiness. Too many of us wait until it’s too late.

Dixie offered valuable insight as I labored over Waiting. As I get ready to celebrate the release of my novel, part of me does so with sadness. I will never be able to place a signed copy in her hands and thank her for all of her suggestions.

Take time to tell the Dixie’s in your life how much you love and appreciate them, even when they gruff back at you, pretending they don’t care. There’s still a little girl inside each one of them that needs a hug before they fall asleep.