My short story, Lost in Atlanta, placed third in the 2016 Idaho Magazine Adult Fiction contest. The story is about two women who get lost looking for information about Peg-Leg Annie. 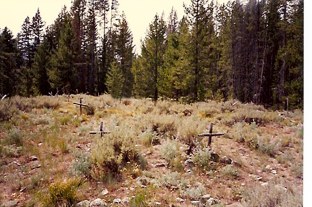 I’m excited to be part of the Historical Novel Blog Tour hosted by writer Tiffani Burnett-Velez. Thanks, Tiffani, for inviting me to participate.

Who you are, where you’re from, your writing credits.

I’m a “farm” girl, raised in North Dakota until age nine, and then moving to southern Idaho. When I say farm girl, I don’t actually live on a farm, but I know how to milk a cow, and I do live on ten acres, mostly pasture. The only animals I keep are three small dogs that I love to pieces. For several years I played with the idea of keeping bees but my husband just retired and we don’t want to take on anything that will keep us from travelling, so that idea is on hold. I’m organic and love to play in the dirt, earning the name Mother Earth from close friends. For twenty-some years I worked in a bank, and when I left my “day job,” I started writing professionally. I started freelancing with mostly nonfiction, then took on a column for AG WEEKLY that I wrote for six years. I’ve written a bit of poetry, but my love is fiction, and particularly women’s fiction. When my hometown turned 100, I published a book of essays commemorating that event. I’ve co-authored several anthologies, a children’s book, and just recently published a book called Waiting, which won the 2014 Idaho Author Awards Top Ten in fiction. My newest novel, Goldie’s Daughter, will be published by Booktrope this summer. I’m excited to talk about this book and its development.

What is your latest historical fiction piece?

Goldie’s Daughter begins in the Idaho mining camps in 1882. Goldie was the town prostitute and the story is actually about her daughter, Emily, and how Emily overcomes her reputation as a prostitute’s daughter.

Why did you choose to write it?

We have a cabin in Featherville, Idaho, near the mining camps of Rocky Bar and Atlanta. Featherville was actually near a mining camp too named Esmeralda. As we spent summer vacations there, we wandered the mountains and learned more about the mining history. I heard about a woman named Peg Leg Annie. That started me thinking. What if I was Peg Leg Annie’s daughter? What if I had to grow up in a mining camp? That’s how the idea for the novel evolved.

What about that era appeals to you?

I love everything Victorian, and this is just at the end of the Victorian age. My favorite pastime is haunting old cemeteries and Victorian mansions. I love the West and the open spaces and how where a person lives affects the way they live. My character Emily has a tough time in the mining camps and thinks things will get better once she travels to a more civilized town. But when she gets to St. Louis, she discovers civilized society can often be harder to navigate then the gritty mining camps.

Are your characters real or fictional? If they’re real, how did you fictionalize them?

All of my characters are fictional. I did use the real person, Annie Morrow, as the inspiration for Goldie McIntyre, but everything is fiction. I did use real names for the towns to ground the story.

What kind of research is involved in writing your novel?

Tons. I read everything I could find about the Idaho mining camps and transportation in the late 1800s. I visited local libraries. For libraries I couldn’t visit, like in St. Louis, I corresponded through mail and email. I even purchased an old Webster’s dictionary to make sure I was using words common to the era, words my characters would use. I also conducted interviews and read old newspapers. 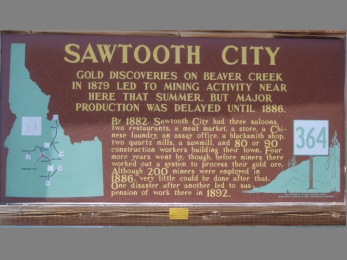 How do you organize the fictional aspects of your writing vs. the historical facts?

I kept historical dates accurate but I changed some of the names, like Sawtooth City became Saw Tooth City. I studied historical events and made sure the same things happened in my story. For instance, an article I read about a Forth of July parade in Rocky Bar became material for a scene in the book. Traveling troupes were popular at that time, and I made sure a travelling troupe visited the mining camps.

How does the historical timeline move your plot along or influence the actions of your characters?

One of the things I wanted to do was show the differences between people who lived in “polite society” vs those growing up in the mining towns. Dirt roads vs roads paved in brick. Full pantries vs the meager food found in mining camps, especially in winter when supplies couldn’t be delivered. And how transportation impacted the way people lived and moved about the country, much of which was still undeveloped.

How do you feel about writers taking creative license with historical facts? Or, does it bother you when facts area changed to fit the story in a movie or a book?

It used to. I don’t like it when authors put words into the mouths of famous people. For instance, I read a novel recently about nurses during the Civil War. The author had President Lincoln interact with the characters, carrying on conversations that “might” have happened. It didn’t make the scenes more real for me, in fact, they felt false. I can be a purest sometimes and I don’t like it when authors rewrite history to serve their stories, but I understand why they do it. I think they risk offending their audiences when they do because some people are unwilling to suspend their disbelief, especially if they are staunch historians.

What’s next for you after this present work?

I have several projects in the works. A novel set on the Oregon Coast, a collection of short stories in a rural setting, and a book with regional stories and recipes. I’m always working on something. Goldie’s Daughter will be out this summer, please watch for it.

Summer leaves today, which reminds me of a recent trip to the mountains. It was the weekend before Labor Day. My husband and I were enjoying the summer weather at our cabin near Featherville. It was one of those gloriously quiet weekends. Soon enough the roads would be thick with dust and campers eager to celebrate the last summer hurrah with the upcoming three-day weekend. But that weekend the only thing stirring was the Feather River and an occasional chipmunk scampering over logs in the woodpile.

“Let’s go for a ride,” my husband said, wanting to take advantage of the nice weather. So we hopped in the truck and meandered over the back roads following the river.

We passed horses, we passed sheep. Gravel skipped under our tires as deer bounded across the road in front of the truck. We slowed down and Emily sniffed the air while Boo and Riley barked.

“Wow, did you see that big dog,” I taunted my pets. They all wagged their tales.

“Stop.” I pointed to the hillside. “Look at that.” I opened the door and walked over to the shrubs, thick and plump with purple chokecherries.

Farther on down the road, I made my husband stop again. This time I didn’t leave the truck, but peered at the hill beside me.

“Last year’s forest-fire didn’t devour everything,” I said. “Look at the elderberries.”

They were everywhere. Some green, some purple, some powdery white meaning they needed picking soon. I was beyond tempted, immediately imagining my juicer full of fruit, the kettle on the stove humming. We studied the hills for a while and then traveled on, empty-handed.

As we rounded the road back to our cabin we pulled over and stared down at the small pond Fish and Game stock in the spring. No one was angling, and as we watched fish jumped at insects, leaving concentric circles on the water.

“I’ve never seen the pond this low,” my husband said. “Look. You can see clear to the bottom of the dredge.”

I aimed my camera at the abandoned machine, a dredge that years ago chewed up the riverbed, spitting it out into odd-shaped Cairns. Carnage the dredge left behind. From where we stood we could see river-bottom, the place where the dredger finally stopped to rest. It was impressive. It was sad.

“Well,” my husband said as we pulled into our driveway. “Are we getting a bucket and going back for those berries?”

“Naw,” I said, even though I was tempted. “We’ll leave them for all the berry-pickers coming to the hills next weekend.”

I nodded. I’d leave them for someone else to enjoy.

“Okay.” He settled into a chair on the back deck. Enjoying cool drinks, we listened to camp robbers chatter and watched hummingbirds dive-bomb the feeder.

“This is nice,” I said. One simple day filled with summer wonder and all the things we left behind. 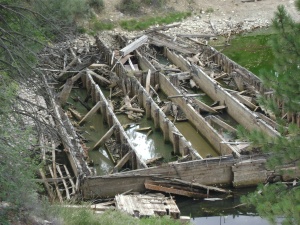 Looking for Stories at Stricker Ranch

We are fortunate to have one of the oldest buildings in Idaho nearby at Stricker Ranch. Old Rock Creek Store and Stage Station, located approximately sixteen miles southeast of Twin Falls, Idaho, sits on the original wagon trail to Oregon, and is a great place to reflect and listen to stories. Here I am at the pioneer cemetery west of the store contemplating those buried there. The Friends of Stricker Ranch conducted a tour of the ranch that night and plan to hold more in the upcoming months. What a fascinating way to step back in time and brush up on history. 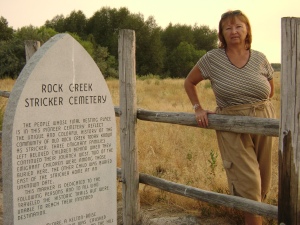 This entry was posted in Historic sites, Inspiration, year 2012 archives and tagged Stricker Ranch and Homesite.

Looking for Ghosts at Stricker Ranch

I have been blessed with a son who takes time from his crazy schedule to make sure my grandsons spend a good part of July with me every year. This isn’t easy because he has to load his three sons into a car and drive 8 1/2 hours to make this happen. Each year we do something fun and memorable. One year we went to Lagoon Amusement Park in Utah. Another year we painted birdhouses and made stepping-stones for the garden. This year, grandson Dante is big into ghost hunting so we took a trip out to the historic Rock Creek Station and Stricker homesite south of Hansen, Idaho. Besides a “haunted” house, there is an interpretive center at the site, and the Friends of Stricker, Inc. are restoring the old store, which is one of the oldest buildings in southern Idaho.
Stricker Ranch is a great place to learn about the Oregon Trail. Dante thinks it’s a great place to look for ghosts. Here he is his with his brother Dmitri hunting ghosts in a cellar once used to store food and supplies, as a jail, and reportedly for protection from Indians. 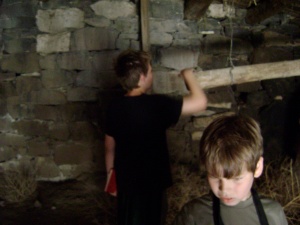 This entry was posted in Historic sites, year 2010 archives and tagged life.